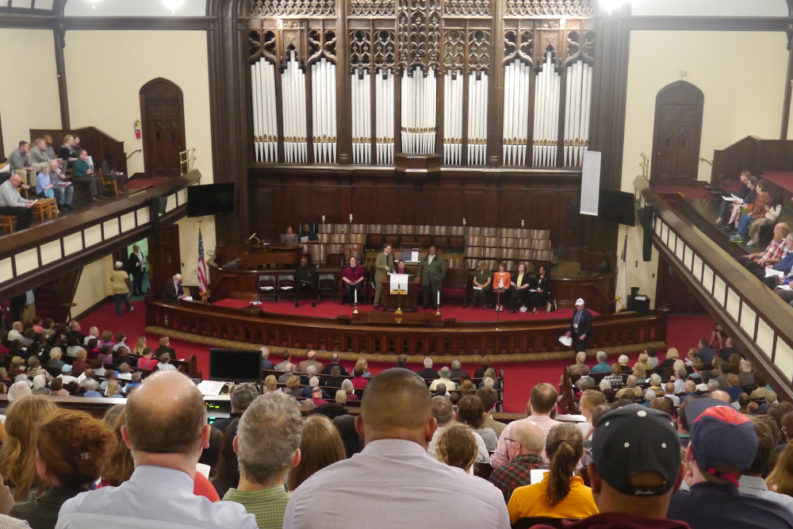 Justice Knocks: Sheriff & Police Chief Answer, School Board Does Not

“Knocks!” thundered back the 1,000 or so people in the pews, members of about 16 congregations across the city. They repeated the chant three times, then thundered their feet against the floor like the hand of God knocking.

They were members of Justice Knox, a faith-based organization founded to pursue social justice in Knoxville asking local leaders to support specific policies to address community problems. For its test case, the coalition formed last year focused its attention on education and mental illness, asking that teachers and law enforcement officers be provided with different types of training to help prevent jails being filled with the mentally ill and low-income black kids.

Justice Knox is affiliated with the national Direct Action and Research Training Center, which provides support to similar organizations in more than 20 American cities and supplies a ground-up model for identifying community problems and researching policies to combat them. The movement is focused around a passage from the Biblical prophet Micah: “What does the Lord require of you, but to do justice, to love kindness, and to walk humbly with your God?”

Sixteen local congregations spent a year deciding what problems to work on, researching them through in-depth interviews with local and distant experts, and then meeting with local leaders and asking them to attend commit publicly to the Justice Knox requests at this “Nehemiah Action Assembly.” It is named after the Biblical story of Nehemiah, who gathered the community to demand justice from leaders who were allowing hungry people to be exploited during a famine.

But only half of the Knoxville leaders even showed up, despite having made previous verbal commitments to do so. Specifically, Board Chairwoman Patti Bounds and member Jennifer Owen agreed to come, but neither would come to the front when Battle, one of the co-chairs of Justice Knox, called for them repeatedly.

Justice Knox was asking school board members to commit personally to support funding full restorative justice training to the tune of $500,000 over the next two years, in five pilot schools where restorative justice practices have already begun, as recommended by a recent community task force on Disparities in Education. Restorative justice is a school management system that focuses on repairing relationships rather than punishment – particularly suspension or arrest – for minor offenses related to disruptive behavior. Justice Knox also wanted the school board members to personally visit Fulton High School to see the method in action and to report back to Justice Knox on progress in the fall.

“We are deeply disappointed that they chose not to respond to their constituents,” Battle, who is pastor at Tabernacle Baptist Church and co-chair of Justice Knox, told the assembly. “We are not convinced nor are we confident the Knox County School Board is committed to high-quality restorative practices. They say they are, but tonight we see that’s just PR.”

He went on to say that Justice Knox has been “accused of ‘mob activity’ and that we are being bullies. I don’t see a mob tonight,” he said, scanning the sea of people sitting quietly in the pews. “I see faithful, informed citizens who want what’s best for our children.” The crowd applauded loudly but politely. He added that if this made school board members uncomfortable, suspending students for wearing hats or arresting them for disorderly conduct makes Justice Knox members uncomfortable.

Battle said the school board is preparing to vote next week on a contract for “very watered-down” one-day training on restorative practices and cultural competency. “Doing this poorly is worse than doing nothing at all,” he said. “It gives the opportunity to continue that narrative of despair.”

“Since the school board won’t join us tonight, we invite you to join them!” Battle cried.

Afterward, many in the crowd discussed plans to attend the school board meeting. Among them were Drew Steen and Karen Lloyd, University of Tennessee professors who agreed they were “extremely disappointed” that no one came from the school board. Lloyd says she got involved with Justice Knox after she decided she was spending too much time getting frustrated about national issues and not enough time trying to change things for the better locally. Others said they’d be going back to their congregations to muster members to attend the school board meeting.

Sheriff Jimmy “JJ” Jones and Knoxville Police Chief David Rausch both committed to having all officers on the street trained in two years and all jail officers trained within three years.

Jones also agreed, on behalf of himself and County Mayor Tim Burchett, to a request that around $10,000 be spent to hire a nationally-recognized expert evaluate county practices involving the new “safety center,” which will soon be built to divert mentally ill minor offenders to treatment instead of jail.

Justice Knox co-chair John Mark Wiggers, priest at St. James Episcopal Church in North Knoxville, said that Burchett “chastised” the Justice Knox team who met with him for not being more politically vocal in support of the safety center during the years when Burchett was trying to build support and funding for the concept. He acknowledged that although many churches were doing “mercy work” to help those affected, “Maybe we have fallen down on doing justice. But we’re here. And I think we’re pretty good at gathering numbers,” he added, glancing around the church packed almost literally to the rafters.

Mayor Madeline Rogero sent a letter saying she thinks the county and city have done enough research and don’t need to hire a consultant to evaluate the safety center program design.

The letter was signed not only by Rogero but also Burchett, Rausch and Jones; however, Jones (and via Jones, Burchett) voiced a different position Monday night, saying he’d supporting the evaluation after the safety center has been open six to eight months. The Justice Knox leadership team agreed to the delay.

The letter to Justice Knox ended by asking for help: “Will you help us raise more funds for local mental health service agencies so they can provide additional social services and supportive housing?” Wiggers read this out, then said, “I think I speak for all of us when I say –” he paused, then bit out – “We will faithfully continue to pay our taxes.” Applause thundered.

In response to the letter’s question, “Will you volunteer for these agencies so they can expand their reach?” Wiggers declared, “We FOUNDED many of those agencies,” and went on to provide a long list of faith-based charities that help this population and already function mostly due to faith-based volunteers.

Rev. John Gill, pastor at Church of the Savior United Church of Christ, wrapped up by saying, “This is just the first step in people of faith working with community leaders – not against but with… We’re not gonna stop knocking until we see that real change has come.”